Justin Sitler is Swinging for the Fences with SOA and Safeway

If there is one thing that we know about Justin Sitler, it is that inning after inning he is committed to putting in the hard work and swinging for the fences on-and-off the diamond.

Since 2013, Justin has been lining up at the plate with Special Olympics Alberta with the Camrose affiliate.

The 25-year-old slugger has found his place as a member of the Cardinals softball team, and at Tabb Lanes he can be seen bowling strikes with the 5-pin team.

“I wanted to be active and be more social,” says Justin on why he joined Special Olympics.

He has been bowling for the past 15 years and softball is something that has come naturally to him since starting with the Special Olympics program.

“My favourite thing is hitting some good ones,” says Justin. “I’ve had a couple home runs.”

Justin has really gelled with the team and he stated that not only are the Cardinals great players, but they also help each other improve and push each other to be better.

He enjoys pushing himself to be his best and this mindset is one of the reasons why he decided to apply at the local Safeway in Camrose.

Justin applied for the job in 2014 and started in December of that year as a part-time courtesy clerk.

The decision has clearly paid off for Justin who, similar to his Cardinals team, has found a motivational and supportive team at Safeway.

“It has been so incredible to watch Justin’s social skills grow since he began his job at Safeway in Camrose five years ago,” says his mother Lorrie, who works as the Alberta Law Enforcement Torch Run Manager.

“Safeway has provided a caring environment where the staff and management understand his challenges but work with his strengths to ensure he is successful at work.”

Sobeys Inc. employs athletes in stores across the country and is committed to building an inclusive workforce.

Justin has enjoyed his experience at Safeway and had nothing but good things to say about his fellow employees and to Sobeys Inc. for all their support, including the second annual check-stand campaign.

“EVERYONE WHO WORKS AT SAFEWAY IS GREAT, THAT’S FOR SURE,” SAYS JUSTIN. “THEIR SUPPORT IS SOMETHING I HAD NEVER EXPERIENCED BEFORE.”

Justin likes to watch TV, especially one of his favourites, Battle Bots. He likes all kinds of games including card, video, board, and most other varieties.

Even through his hobbies, Justin likes to swing for the fence, whether it is working on his YouTube channel or improving at archery.

And he has applied this mentality to his experiences with Special Olympics.

Justin earned a bronze medal in softball at the 2013 SOA Summer Games in Devon and at the time he admits he was a little disappointed.

However, he has become more appreciative of that medal over the last few years as it was a symbol of a new goal – to keep trying your hardest.

He used this bronze as motivation to improve with his teammates and his hard work paid off as they won the gold at the 2017 Provincial Games in Medicine Hat.

Justin is using his experience to inspire other athletes to join the movement.

“Well, I would say pick a sport that you think you would do good in and then work your way up,” says Justin.

And if you wanted any proof that this advice is golden, then look no further than Justin.

Sobeys wants to raise $1 million to help support athletes like Justin and to do your part simply visit your nearest Sobeys, Safeway, Foodland, IGA, Urban Fresh or Thrifty Foods from June 20 to July 3 and make a $2 donation. 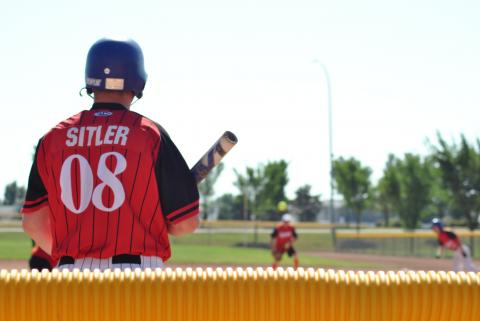