Spins, turns, and dancing on ice is Barb’s specialty and there is no one more qualified to lead Team Alberta figure skating than her.

Barb has been with Special Olympics for over 20 years, but she has been a professional figure skating coach for 45.

This will be her fifth straight appearance with Team Alberta and the Calgary coach has nothing but praise for her girls, stating that they are the most conditioned team she has ever brought to the national stage.

She was able to coach Team Canada in 2017 at the Special Olympics World Winter Games in Austria and she is hoping she will get the chance to send more athletes from Alberta this time.

While she is proud whenever her athletes are able to compete at the highest level, that has never her main goal as a coach with Special Olympics.

“It’s more rewarding than just regular skating,” says Barb. “You feel like geez, I really did do something here, whether it’s just standing on their own or, you know, going to Worlds it doesn’t matter.”

As soon as she joined Special Olympics, she knew it was a perfect fit for her.

“HAVING TAUGHT SKATING FOR SO MANY YEARS, THIS JUST FEELS LIKE WHAT I WAS SUPPOSED TO BE DOING,” SAYS BARB.

Barb credits Special Olympics and Skate Canada for working together to sync skating levels in programs across the country.

It has allowed coaches within Special Olympics and those coaching outside clubs to have a universal understanding of what level a skater is at for any competition.

Basically, athletes can compete at the same skill level across the board.

This has especially helped Barb maintain the collective goal of improving the skills and training quality for all figure skaters.

Getting her Special Olympics figure skaters to reach the World Games has been incredibly rewarding for Barb, as she has seen the hard work and dedication that these athletes put into their craft.

“It is fun taking the new people and then you go to the next level, and it’s like, you’re stepping up your game – it’s a little bit more intense, but it’s also a lot of fun,” says Barb.

Barb has instilled a set of expectations for her athletes leading up to Nationals, but makes sure the team knows that she ultimately hopes the athletes just try to do their very best and not worry about the judges.

The pure love of coaching Special Olympics that Barb first felt 20 years ago is still going strong and Barb feels that she has learned three main things from her time volunteering:Be ready for anything, celebrate the joy of the moment, and have patience.

Let’s hope there are plenty more tremendous moments for Barb and her figure skating team when they take the ice in Thunder Bay! 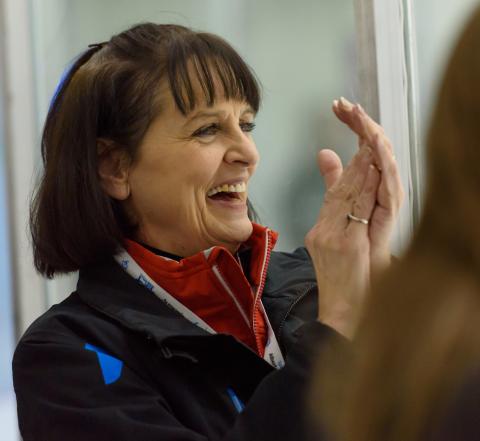