The floor hockey team in Wetaskiwin will be well-prepared, well-trained, and ready to play their hearts out thanks to the 30 years of experience that Associate Coach Jan Pydde brings to the table.

Jan’s journey with Special Olympics started in 1995, volunteering with the 5-pin bowling program in Leduc.

She will be going to Nationals as one of two Associate Coaches for the Warriors floor hockey team, but for Jan this will be her first time attending as a coach.

Jan attended the 2004 Special Olympics Canada Winter Games to cheer on her son Shaun as he competed in Charlottetown.

Now they will both be in Thunder Bay as members of Team Alberta with Shaun being selected as part of the curling team.

Her excitement for the Games is growing with each passing day and that sentiment is shared by the athletes who are hard at work in preparation for their shot at gold.

“The floor hockey team is working hard – both physically and mentally – to challenge themselves in preparation for the National Games,” says Jan. “The team spirit is growing as the weeks go by and they realize just how quickly the time is passing. Excitement is growing in anticipation of the games.”

According to Jan, the Warriors have been working to improving their physical strength and endurance, while becoming a more cohesive unit together.

They are building chemistry and encouraging each other to achieve the highest level of fitness, says Jan.

Those are one of the many reasons Jan stays so involved in Special Olympics, but being able to coach her son is something she does not take for granted.

“I AM PROUD TO COACH AND WATCH SHAUN PLAY THE SPORTS HE ENJOYS TO PARTICIPATE IN – BEING SUCCESSFUL AND EXCITED ABOUT THE MEDALS HE HAS WON AT COMPETITIONS,” SAYS JAN. “IT HAS BEEN FUN AND ENCOURAGING TO WATCH SHAUN DEVELOP AND EXCEL AS AN ATHLETE AT THE VARIOUS SPORTS HE COMPETES IN.”

Staying involved also allows for Special Olympics programs to stay running and her main goal is to support all of the head coaches so that all of the athletes have various sports to participate in.

Jan recognizes that for the majority of the athletes, Special Olympics is the only form of recreational activities in the community, which is another reason she remains involved.

Jan has been an amazing volunteer and coach for Special Olympics, so please join us in wishing her, Shaun, and the Warriors floor hockey team the best of luck at Nationals! 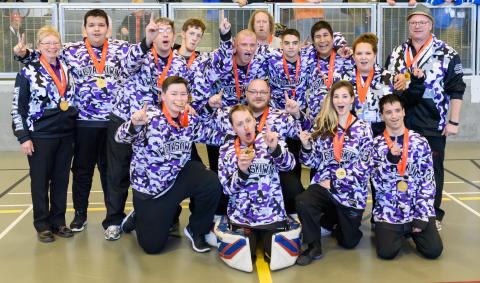