For the Pedwells, coaching in Special Olympics has been a family affair as both Matthew and his wife Chelsee have been heavily involved for over a decade now.

Matthew would always drive his wife to volunteer at Special Olympics programs and after seeing the joy it brought her, he decided to sign up too.

That joy quickly blossomed and Matthew went from coaching bowling once a week to being involved in multiple sports and, special projects with the Technical Committee for floor hockey in Alberta.

Now with 14 years of coaching experience at Special Olympics under his belt, Matthew is the Head Coach for the Special Olympics Alberta-St. Albert floor hockey team and will be taking them to their first ever National Games.

The team knows that the increased level of competition is something they will have to prepare diligently for and they are taking the steps to making sure they are at their best come February.

Matthew talked about how playing against bigger competition in Calgary for Provincials was extremely beneficial for the coaching staff and the athletes.

“It was great to be able to play teams from all across the province in Alberta, just to see how different teams do different skill development and, how they do different things,” Matthew said. “You know, along the way we’ve picked up quite a bit of information from other teams and other coaches, and we try to mimic that and make it our own.”

Beyond skill development, Matthew has the team working on their cardio and conditioning in preparation for the bigger and faster teams they will be facing in Thunder Bay.

The team recently completed the Heroes Running for Heroes 5k fundraiser, which was a huge stepping stone for the team in terms of their comradery and conditioning. 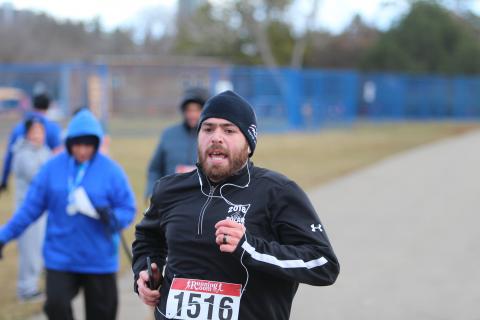 Refining the player’s skills, working on their set plays, and positioning are other key elements the coaching staff have got the athletes working on in hopes that they can increase their scoring chances and be sounder defensively.

As serious as Matthew and his team are preparing for Nationals it is all for fun and that is the biggest reason he comes back to coach year after year.

“I thoroughly enjoy it. It’s a good way to relieve stress to just kind of get away from the daily grind of work Hard to have a bad time playing sports,” said Matthew. “So if you can grow, share some of our skills and impart our skills to athletes and, how to improve and be better hockey or slow pitch players, that is really rewarding, and it’s a lot of fun.”

Matthew has been with this floor hockey group for the past ten years and says that both he and the athletes have developed their skills immensely during that time.

That special bond the group shares together was never higher than when they were able to capture the gold medal that propelled them into Nationals.

Matthew talked a little about what that moment was like for him and what emotions he was going through.

“SO THE FIRST FEELING OR EMOTION WE HAD WITH JUST PURE EXCITEMENT. WE WERE ALL EXCITED TO HAVE THE OPPORTUNITY TO REPRESENT ALBERTA ON THE NATIONAL LEVEL,” HE SAID. “SO WE WENT FROM PURE JOY AND ELATION TO NOW WE GOT TO GET TO WORK, SO WE’VE BEEN WORKING REALLY HARD THIS SUMMER THROUGH A LOT OF OUR PRACTICES TO BEGIN OUR CONDITIONING AND GET READY FOR NATIONALS.”

We are thrilled Matthew gets to bring this group of athletes to Thunder Bay and wish him nothing but the best for the competition.