22 years ago, Ryan started volunteering with Special Olympics in Manitoba through a program with his Junior A team, and ultimately loved his experience.

Unfortunately for Ryan, he was not able to stay involved in Special Olympics since his job with the RCMP moved him around to different towns that did not have any programs available.

So when he landed in St. Albert four years ago he finally had the opportunity to get involved again and did so immediately.

“What I love about it, is obviously the athletes and the smiles on their faces, it kind of puts things into perspective for me,” says Ryan. “Just how gracious the athletes are, they’re gracious in victory and gracious in defeat, it’s refreshing to see and fun to be around.”

Getting back into coaching was something Ryan always wanted to do, as the coaches he had in life were positive influences on him, especially his father who coached him growing up.

“A lot of the coaches I had after that, I was close with and they had a big impact on me,” he said. “I remember the things they said and they taught me a lot of life lessons, so I’m just trying to have a little bit of impact on other people’s lives as well.”

Part of the coaching philosophy for Ryan and the other coaching staff is to preach team camaraderie and team support.

The team has been taking that to heart and Ryan has noticed the team becoming a more cohesive unit that has been extra supportive with one another.

He has also noticed players giving that little bit of extra effort and holding each other a little more accountable with the goal of reaching that next level that comes with playing on a National Stage.

Ryan has made a few observations about coaching generic athletes and the ones in Special Olympics and thinks the athletes here have especially incredible attitudes.

“IT’S BEEN EXTREMELY REWARDING WORKING WITH OUR GENERIC ATHLETES TOO, BUT I JUST FIND THAT EVERY DAY WHEN YOU SHOW UP TO SPECIAL OLYMPICS THE ATHLETES ARE EXCITED TO BE THERE,” HE SAYS. “EVEN WHEN THERE IS A BIT OF A DOWNTURN OR SOMETHING NEGATIVE HAPPENS IT’S QUICKLY TURNED AROUND.” 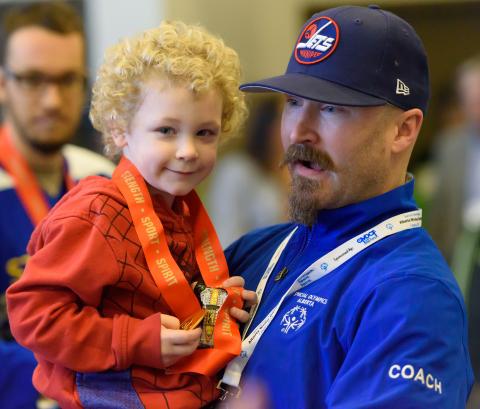 Ryan would go onto say that the overall feel in Special Olympics is refreshing since there is nothing but pure love of sport from the athletes to the parents.

That pure love was on full display for Ryan when they were able to win the gold medal at Provincials and recounted the moment he shared with an athlete, Phil Zuk.

“A buddy on the team named Phil, he just looked up at me when we won that tournament, and he was just overjoyed and over the moon,” said Ryan. “I found out after that he had been playing Special Olympics for 28 years and he’s never won a gold medal prior to that and he’s never been to a National Games before. I’m extremely happy for our whole team, but especially for Phil in particular.”

Ryan is looking forward to experiencing National Games for the first time as an Associate Coach with St. Albert’s floor hockey team, so let’s wish him and the Wolfpack good luck in Thunder Bay.