motionballU Makes its Mark on Alberta

motionballU events are organized by student groups at each of the universities that pair Special Olympics athletes with teams of students for a fun-filled day of athletic competition through a variety of unique sports.

“I HAVE WORKED WITH MOTIONBALLU FOR 2 YEARS NOW AND WATCHING THE EVENT PLAY OUT EACH YEAR IS SUCH A FANTASTIC THING TO SEE, FROM THE SMILES THROUGHOUT THE DAY TO THE FRIENDSHIPS DEVELOPED BY THE END OF THE EVENT, IT REALLY HIGHLIGHTS THE IMPORTANCE OF EVENTS LIKE THESE ON UNIVERSITY CAMPUSES WHICH SEND LOUD MESSAGES OF INCLUSION AND UNITY ACROSS CAMPUS, INDICATING THAT IT IS REALLY EASY TO CREATE MORE SAFE SPACES AROUND CAMPUS AND DE-STIGMATIZE INTELLECTUAL DISABILITIES IN THE REALM OF SPORT AND EDUCATION.” – BECCA PAGE, EVENT DIRECTOR

The University of Calgary event on March 23 was a major success as 33 students, five motionballU members and 13 Special Olympics athletes worked together to raise over $3500 for the Special Olympics Canada Foundation.

Becca, who coordinated the event, said that it was an awesome day of bonding and comradery with friendships being made and everyone enjoying themselves

“One of my personal favourite moments was at the end of our event we had a little dance party and it was so cool to see how much fun athletes and students were having just hanging out with each other, a special moment I don’t think I will forget anytime soon,” says Becca.

Members of the Students for Special Olympics Calgary also participated in the event and the club’s president, Nathan van Decker was happy to be involved once again.

“I just want to thank motionball for the work they do and for the opportunity to meet wonderful people and play integrated sports.”

Rebecca DePasquale organized the first-ever motionballU Marathon of Sport at the University of Lethbridge and not only was she thrilled with how well the event went, but also her experience with motionball too.“I HAVE A COUSIN WITH DOWN SYNDROME AND I OFTEN SEE HOW PROGRAMS SUCH AS MOTIOBALL AND MOTIONBALLU CAN INFLUENCE THE LIVES OF INDIVIDUALS WITH INTELLECTUAL DISABILITIES,” SAYS REBECCA. “THIS WAS THE DRIVING FORCE IN MY INVOLVEMENT WITH MOTIONBALL AND NOW I’M HOOKED! I HOPE TO BE A PART OF MOTIONBALL FOR AS LONG AS POSSIBLE!” 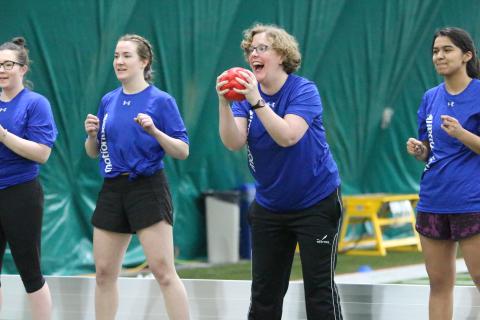 The event took place on March 10 at the University of Lethbridge’s First Choice Saving Centre for Sport and Wellness and hosted around 50 students and athletes who raised over $4800.

It was a huge success and while Rebecca graduated this year, she is confident that motionballU events will continue in southern Alberta.

“Don’t worry the marathon of sport will be at U of L in 2020 and is in good hands,” says Rebecca.

motionballU also debuted at the University of Alberta on March 23 thanks to the Special Olympics UAlberta Student Group and their president, Emma Wolowski.

“This was our first time hosting a motionballU event and it was a huge success,” says Emma. “The feedback we’ve received from the students who participated has been overwhelmingly positive, and the athletes all had a great time as well.”

70 students, 10 Special Olympics athletes, and 15 student volunteers helped to raise $6165 in their first-ever event and the plan is to run it back next year.

“MOTIONBALLU IS TRULY SUCH A FANTASTIC PROGRAM BECAUSE SO MANY UNIVERSITY STUDENTS HAVE THE PASSION AND THE DRIVE TO CREATE CHANGE, BUT DON’T KNOW WHERE TO START,” SAYS EMMA. “THIS EVENT REALLY LETS US CONNECT STUDENTS TO THE SPECIAL OLYMPICS MOVEMENT, AND LETS THEM SEE FIRSTHAND WHY IT’S SO IMPORTANT.”

motionball empowers Canadians to be leaders in their communities by raising funds and awareness for Special Olympics athletes.

Thank you motionball for your continued efforts to support the lives of people with intellectual disabilities.

Mark your calendars because the Marathon of Sport is back in Alberta.

Marathon of Sport takes place in Calgary on June 22 and in Edmonton on September 28, so head to motionball.com to find out how you can sign up or get involved today.