“HE WAS AN INFLUENCE ON SPECIAL OLYMPICS PROGRAMS ALL OVER THE PROVINCE; OFFERING HELP TO BUDDING AFFILIATES AND EARNING THE RESPECT OF EVERYONE THROUGH HIS WORK ETHIC AND DEDICATION TO MAKING SPECIAL OLYMPICS BETTER.” – GEORGE MALCOLM

Malcolm and the board felt that the best way to honour Charlie’s memory was to create a Memorial Award that would be presented annually at the their Special Olympics year-end awards ceremony and banquet. 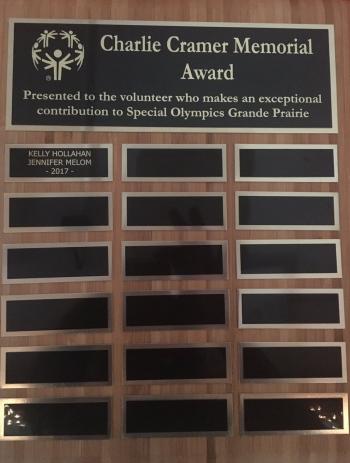 As a reflection of Charlie Cramer and his work nominees for the award should:

The first Charlie Cramer Memorial Award was presented on May 26, 2017 by Charlie’s wife, Marilyn and his two daughters Tricia and Kaylee, who are both Special Olympics athletes. Kelly Hollahan and Jennifer Melom were honoured with the award for their outstanding volunteer work for Special Olympics.

“He left a lasting effect on everyone he came in contact with and the award is just a small way we can keep his spirit alive in SOAGP. He knew every athlete, coach, and volunteer, and they all knew him,” says Malcolm. The award will memorialize Charlie’s dedication to SOAGP and maintain the legacy of a man whose hard-working attitude will be missed at Special Olympics.